It was a busy weekend. Little Paul had a baseball game Saturday morning (he lost again :( Poor thing). Game started at 1 and we didn't get home until after 4:30 and it was a home game. Had to hurry up & changed then went to Cassie's Surprise birthday party. It was fun to be out with some friends and the kids had a blast playing with Cassie's girls. Food wasn't very good, especially for the price!
Sunday I took the kids to church. They really enjoy the youth programs. After church Grandpa Paul took the kids fishing while Paul and I did some more work on the house. We are remodeling & rearranging everything. Putting my crafting stuff downstairs. Moving the computer to the DR. Paul & I are moving into the Den. Little Paul is moving into our room so Maria & him will have their own rooms.
Maria already picked out the colors she wants for her room. Going to take down the Indian's wall paper & paint big pink & purple strips horizontally on the wall. Maybe 4 total. On the big wall I'm going to paint a picture of Patch (her old horse) out in a field with some flowers, birds, and butterflies. I have been thinking of maybe getting some of those carpet tiles as the carpet in there is a dark blue. Didn't think that would go well with the pink & purple.
Little Paul hasn't decided if he wants to do anything to our room. I think he likes the blue wall paper. Maybe change his carpet as well, since that room has pink.
In the LR we're going to take out the old wood paneling. Maybe paint in there? The DR need the wallpaper taken down, on the walls & the ceiling!
In cross stitch I've been busy as well. I'm taking a break from Dawn, to work on my Secret Exchange for one of my forums. It's a secret so I can't say anything more about it until it's over. I'm going to start a pattern for Aubrie's wedding after I finish my SE. It's called Two Hearts Beating As One by Cross Stitch Art. I need to do Fairy Celebration II,& I Believe In Fairies (PR) for Billie (my older sister). After they're finished I'm going to make them into pillows. For Ang (my younger sis) I've decided to do Celtic Christmas (by L&L) .
Well, that's all for now as I need to get busy.
Posted by Stitching Sweetie at 10:59 AM 2 comments: Links to this post

Stitching Sweetie
Akron, Ohio, United States
I am a 36 yr old personal finance consultant. I have a 14 yr old son and a 11 yr old daughter. I have been married to the most wonderful man for 14 years now! I enjoy cross stitch, painting, knitting, gardening, interior decorating, reading, coaching & attending my kids' events.

1. work on the frame of Wedding Sampler by A Stitch In Time 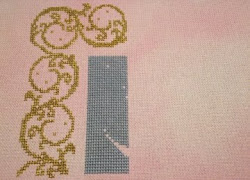 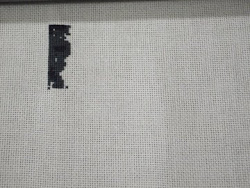